Most anticipated PC, PS4 and Xbox video games in 2020 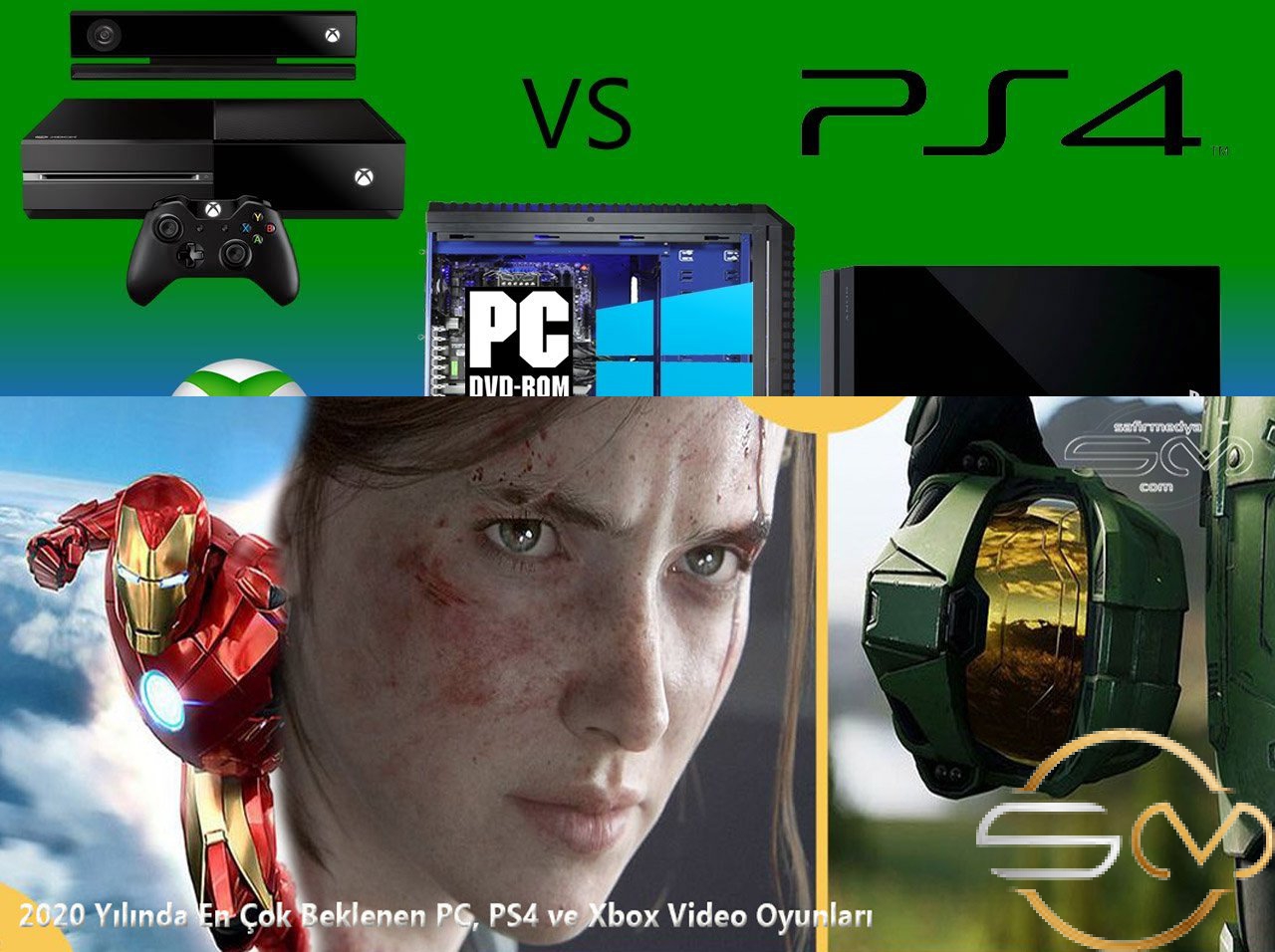 Last year may not have been one of the best years in the game, but at least we got the Untitled Goose Game. However, in the 2010s; Legend of Zelda: Breath of the Wild has stepped forward in the industry with titles such as Batman: Arkham series and Last of Us. We are now at the start of a new decade and we are in the twilight zone too. The console market is changing rapidly. Soon, the PS4 and Xbox One may turn to the garbage heap and we may have to say goodbye to them as we welcome the new super powerful next-gen console. The Xbox Series Xen brings excellent gaming technology that rivals even the power of powerful computing components, and the PS5 looks just as ambitious.

But don't worry, old consoles stand out with an update for new games; And even if some of the games below are geared towards the next generation, we'll always have Nintendo Switches. This year is full of action and games that cover all audiences, from sniper and war games, to some insanely narrative-driven games, to equally artistic and whimsically realistic projects.

Everyone is getting into VR games these days. Marvel has tried several times before, but Iron Man VR actually brought some sound. The idea feels right. A helmet and a two-handed game console seem like enough for VR Iron Man.

A new Animal Crossing! In 2020! Some players who are addicted to this game are delighted. A cultural heir. It will inspire a new holiday called National Game Day. Once a year, players will celebrate their glory as Animal Crossing.

I don't know how many times the world has to be saved from demons, but it seems that the invasion hasn't stopped yet. Thankfully this is a direct sequel to the hilarious 2016 reboot of Doom. So it will be a good waste of time (sorry).

Resident Evil games continue to be made over and over again over the years. Capcom's latest recreation targets the 1999 PS2 game. This time, the zombies look worse than before. These games, which do not get old even after all these years, are still very effective and seriously scary.

The seventh season of the Final Fantasy series is one of the most valuable video games in industry history. It's a year-long wait and it's finally here.

Final Fantasy VII Remake, a revamped version of one of the most iconic games of all time, uses the latest technology to recreate and expand Square Enix's legendary RPG adventure for the current generation.

Take the role of Cloud Strife, former member and mercenary of Shinra, in this game set in a post-industrial fantasy world controlled by the Dark Shinra Electric Power Company, and team up with Avalanche, an anti-Shinra organization, as you continue the resistance.

Visit one of the game's most beloved worlds, with a level of depth and detail possible in the modern age. Connect with unforgettable characters, participate in incredible battles, and experience a story that captivates a generation.

Fight the monsters that wreak havoc in this third remaster of HD resolution of the Mana series, which was first released in Japan as Seiken Densetsu 3.

Assemble a three-character group of six heroes, each with their own mission, and explore stories with modern 3D visuals, an updated combat system, advanced levels and skill systems.

Each character has a different journey, so you can start over with a new team to discover another story. Engage in real-time battles and switch between party members as you attack, evade, and use spells against your enemies.

The Last of Us Part II

The game (The Last of Us Part II), developed by Sony and Naughty Dog, was planned to be available in February. However, it was announced that it was postponed to May due to the ongoing developments on the game. In the last statement, the release date of The Last of Us 2 was postponed for an open period "until the next report" due to the COVID-19 outbreak. [9] On April 27, an unknown Naughty Dog employee released multiple videos with cutscenes, gameplay available on the internet. Later that same day, Sony announced that Episode II will be released on June 19, 2020.

In the late 13th century, the Mongol Empire razed all nations to conquer the East. The only obstacle between the huge Mongolian army and the mainland of Japan, led by the ruthless and cunning general, Khotun Khan, is Tsushima Island.

Samurai warrior Jin Sakai is one of the last surviving members of his clan on the island that was devastated by the first wave of the Mongol attack. He is ready to do whatever it takes to protect the people and get his home back. He must set aside the traditions that made him a warrior and start an extraordinary war to free Tsushima to plot the new path, the Ghost path.

In the late 13th century, the Mongol Empire razed all nations to conquer the East. The only obstacle between the huge Mongolian army and the mainland of Japan, led by the ruthless and cunning general, Khotun Khan, is Tsushima Island.

Join the nomadic adventurous group known as Crystal Caravans in the PS4 remaster of the action-packed multiplayer role-playing game classic. You and up to three of your friends must embark on a dangerous adventure to capture precious grains of myrrh and prevent the world from drowning in toxic Miasma gas.

Get together with up to three friends, choose from four character classes, and travel together through dangerous lands. Battle fearsome enemies and solve challenging puzzles in a variety of environments, including new areas added to dungeons from the original game.

Marvel's Avengers; is a legendary third person action adventure game that combines an original and cinematic story with gameplay in single player and cooperative modes *.

Build a team of up to four online players, master extraordinary abilities, customize the growing Heroes roster and protect the World from increasing threats.

In a future where Super Hero is illegal, young Kamala Khan must regroup the Avengers to stop AIM. Marvel's Avengers continues its legendary journey with new Heroes and ongoing new narration for the best Avengers gaming experience.

Cyberpunk 2077; An open-world, action-adventure story set in Night City of the megalopolis obsessed with power, glamor and body modification. You play as an outlaw mercenary named V who goes after the unique implant that is the key to immortality. You can customize your character's cyber gear, skills, and play style, and explore a huge city where the choices you make shape the story and the world around you.

Step into the paired, sci-fi shooter experience from People Can Fly, the developer behind Bulletstorm.

While humanity is in trouble on the planet Enoch, Outriders catches a signal in a dark and desperate science fiction universe. Play together in this co-op adventure that supports up to three players and can join the game whenever you want

Build your own 'Outrider' character and wait for powerful gunfights, awesome weapons and a new enemy planet to explore in a desperate sci-fi universe.

Godfall is a brand new, next-generation raider fighting game set in a bright fantasy universe filled with heroic knights and mystical magic. Godfall is coming to PlayStation 5 in winter 2020.

Embark on an adventure in the fantasy action RPG game where players hunt for loot, equip legendary armor and take on brutal foes while participating in high-impact third-person melee combat. Face challenging missions that reward you with dizzying loot as you destroy armies standing against you.

The next episode of the legendary series is back in Master Chief 2020 in Halo Infinite! When we think it's time to say goodbye to the franchise, Microsoft fans are saying "Halo!" It will reveal another promising sequel to say.

Developed by 343 Industries for all devices in the Xbox family, including Project Scarlett and Windows PCs, powered by the all-new Slipspace Engine, Halo Infinite continues the story of Halo 5: Guardians and takes the series to an ambitious and unexpected position.

In No More Heroes: Heroes' Paradise on PlayStation 3, you direct wrestling and anime cartoon-obsessed Travis Touchdown, who gets a custom ray katana from an online auction.

After Travis retrieves this deadly sword, he meets the mysterious Sylvia Christel. Lots of money and the imaginary Santa Destroy receives an offer to become the superstar of California's underworld. His mission is to kill the assassin Helter Skelter.

This will be the 2020 game of the year, I promise. A skateboard game where you play like a bird. Nothing else I want and few things I'm as excited about as damn SkateBIRD. It looks great and I am waiting with a yummy breath for the day it will return just to cover the SkateBIRD content. There is no stone set release date yet, except for this year.

Finally, hackers have their own video game franchise. It's time to take London back and you can make anyone you see in this iconic city a member of your resistance. The people are under the pressure of corrupt opportunists, and it's up to you to build a resistance force to give the city back to the people. With a population of all potential insurgents and the city's technology at your fingertips, you will hack, infiltrate and fight on your way to free London.

Best Led TV Options to Recommend for the Year 2020