Samsung launches its new smartphone Galaxy Note 5 at an event in New York City. The Samsung Galaxy Note 5 is no different from the previous leaks, so there is no surprise in terms of both design and technical features.

Samsung's new Samsung Galaxy Note 5, which is a mixture of the Galaxy S6 introduced by Samsung earlier this year and the Note flagship Note 4 of last year, can be described as Samsung's best Note device to date.

Samsung has to compete with the increasingly glowing Chinese manufacturers in both the Apple and the star in the smartphone market. This led the South Korean company to re-design everything, and as a result, the Galaxy S6 and S6 edge smart phones were all new and attractive. These phones had superior features such as fast processor, excellent displays, impressive cameras. That's all in the Galaxy Note 5. 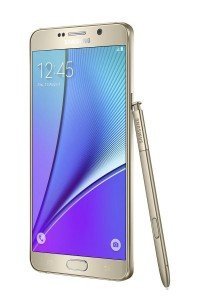 Note 5 also uses the design and materials of the Galaxy S6, with solid glass panels in the front and rear, and a solid metal frame between them. This innovative approach will not like the fans of the old Note phones, because this design and structure for the sake of the removable battery and microSD card support need to say goodbye. There is also no water resistance. In fact this feature was already on the Samsung Galaxy Note phone. When we look at the specifications, we see that Note 5 has an eight-core Exynos processor in the same way as S6. But this time I have 4 GB RAM instead of 3. Note 5 also has 32 GB and 64 GB capacities, but Samsung does not offer a 128 GB capacity. The 3000 mAh capacity battery has a lower capacity than the one in Note 4 of last year, but Note 5 has both wireless charging and fast charging.

Behind the Galaxy Note 5 is the 16-megapixel optical image stabilizer camera, just like the S6. The 5.7-inch Super AMOLED screen also features 2560 x 1440 Quad HD resolution. The screen size is the same as on Note 3 and Note 4, which means that Samsung makes the 5.7 inch standard for Note smartphones.

Of course, the S Pen is the sine qua non of the Samsung Galaxy Note 5. The new S Pen, hidden in the slot in the lower right corner of the phone, will be longer and more comfortable to use than the old ones. Samsung says it improves pressure sensitivity and improves writing performance compared to older models. There are many useful new functions, such as taking the pen out of its slot even when the screen is not open, and quickly taking notes without hassle to open the screen.

The Samsung Galaxy Note 5 comes with Android 5.1 Lollipop. Samsung's TouchWiz user interface and various customizations are also available. There is also an application that makes it easy to stream live to YouTube directly with the Camera app, connect with the PC, and manage the phone from the PC through the new functions.

Samsung announced a little earlier this year and announced the Note 5 before introducing Apple iPhones. The phone will be able to be ordered abroad as of today, and will be available in stores as of August 21st. Turkey also 5 Galaxy Note is expected to be available before the end of this month. We can expect the price to be at almost the same level as previous Note devices.